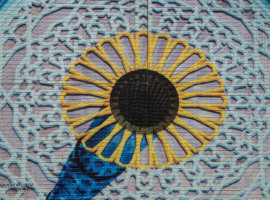 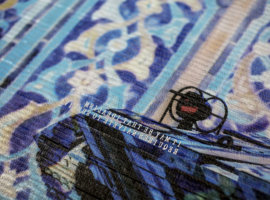 Camouflage’ depicts a tank with a floral motif firing from its gun arm exploding in the centre of a Mehrab – the wall commonly found inside a mosque to indicate the direction of prayer. The Kutbah (Friday sermon) is delivered from the Mehrab, a representation of the dialogue between the religious leaders and the common followers. The Mehrab acts as a powerful theatrical stage where indirect messages, sometimes with negative connotations, influence the ideas, direction and values of the people.  “What is happening on the ground is camouflage. These theocratic countries are using people’s values to tell them there will be a great future of Islam but in fact they are the victims.” (Gharem).

span class="Apple-converted-space">  Gharem depicts this detail to question the transfer of arms trading during this period and its possible beneficiaries.

The Islamic iconography and the tank are submerged in blue turquoise, a colour that commonly appears in Islamic art and architecture, and is used as a metaphor to question the tension and inherent precariousness of the delivery of messages as a political ambition.

The center of the image is a yellow geometric motif, which is Gharem’s satirical response to the reality of the uncertain future of democracy in the Arab world.

Gharem draws the audiences attention to the discreet text that reads ‘It may be that idealism requires naivety to survive’. A subtext to any conversation today about freedom or democracy in the Arab World.