Courtesy of the artist and Gharem Studio 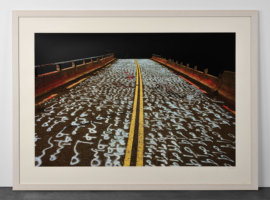 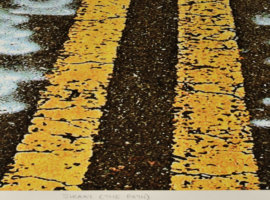 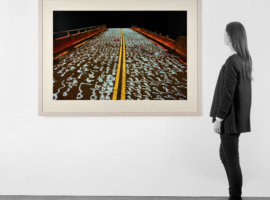 Much of Gharem’s art is performance based, captured in photographs and video, and focuses on our relationship to and trust in physical structures and the natural environment. The Path, or Siraat, commemorates a tragic event that occurred in 1982, when a group of villagers took shelter from an approaching flood on a concrete bridge spanning a river in southwest Saudi Arabia, where heavy rains are often commonplace. Everyone was swept away and most were killed by the deluge. A new road was built nearby but the old one on either side of the washed away bridge remained. On the section of road leading up to the bridge, Gharem and a crew of assistants spray-painted over and over again the word siraat, which means both a literal path and also a spiritual one (e.g., the straight path that leads to Paradise). The repetition of this single word on the roadway becomes a visual chant—a reminder of how we choose our own paths, and a remembrance of the flood victims, who, having chosen the apparent safety of higher ground, lost their lives. This notion of individual choice when it comes to life’s pathways is endemic in Gharem’s work.