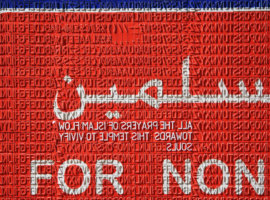 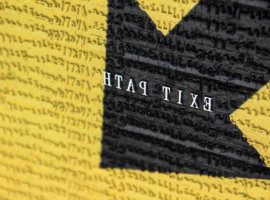 Like many contemporary artists, Gharem often uses mundane elements of life to form penetrating appraisals of modern society. Here he transforms a standard sign found on the road to Mecca into one of his iconic “stamp paintings,” the surface of which is composed of small stamps. As the birthplace of the Prophet Mohammad, the site of the Kaaba (the directional locus of Muslim prayer), and the endpoint of hajj, the annual Muslim pilgrimage, the city of Mecca is considered a holy space and is therefore off-limits to non-Muslims. This sign directs Muslims straight ahead into the city, while non-Muslims are sent to the right and those involved in official business are sent to the left. Embedded within the larger text of the sign are smaller quotes made from the stamps and therefore seen in reverse. The quotes refer to the unity, peacefulness, and sanctity of the city, perhaps included by Gharem as a subtle critique of the practice of exclusivity. For an American audience, the sign is a shocking reminder of our own recent history and the signage that once separated people based on the color of their skin.