celebrated living artists in the Middle East when his
sculptural installation Message/Messenger sold at
Christie’s Dubai for $842,500 to the emirate’s Farjam
Collection. But Lieutenant-Colonel Gharem has been
making art nearly as long as he has been a professional
soldier in the Saudi Army, which he joined in 1992.
A multi-disciplinarian, working in painting, sculpture, video,
performance and photography, Gharem is careful to stay within
the bounds of khotot hamra—the “red lines” that are the limits of
faith—as he wants to continue to live and work in Saudi Arabia.
This is perhaps why his work has become increasingly conceptual
since 2003, as he engages with and interprets history, society and
everyday life in his homeland. At his first exhibition outside the
Gulf, at Edge Of Arabia in London in 2013, I was impressed with
The Stamp, a series of three large, oversized intricate wooden
stamps inscribed with the words Moujaz, Inshallah and Amen,
together with “Have a bit of commitment”. Gharem declared at the
time that he wants to challenge the notions of formal bureaucratic
approval and the power that goes with a stamp. “I want to
encourage my fellow man to have a bit more intellectual rigour,” he
said. “More bravery, more faith in one’s convictions”.
Gharem, the eldest of 11 siblings, was born in 1973—the year of
the oil crisis—in Khamis Mushayt, a remote village in the AlSarawat
mountains. His carpenter father encouraged him to
pursue the arts alongside a military career that would offer him a
guaranteed income. Entirely self-taught, in 1999 he took a studio at
the Al-Meftaha Arts Village, part of King Fahd Cultural Center.
Together with fellow resident artists Ahmed Mater, Ashraf Fayadh,
Muhammad Khidr and Abdelkarim Qassim, Gharem went on to
found the Shattah Collective, whose experimental first exhibition
in Jeddah in 2004 caused quite a stir in the art community.
Gharem had to sell his car to finance the production of Message/
Messenger, but he donated the auction proceeds to the Edge of
Arabia Foundation (which he co-founded) to nurture a new
generation of artists and curators in his homeland; in 2013, he also
founded the Amen Art Foundation, “a safe haven for young artists;
a meeting point, a place to experiment… a think tank, an incubator
for talent”. Earlier this year, HRH Prince Sultan bin Salman bin
Abdulaziz Al Saud pledged more than $1.7bn for the building of
230 new museums as part of a programme to promote the
country’s ancient and diverse culture. Contemporary art is also
on the agenda; and I am certain that Adbulnasser Gharem will be
at the forefront of the scene for a long time to come. 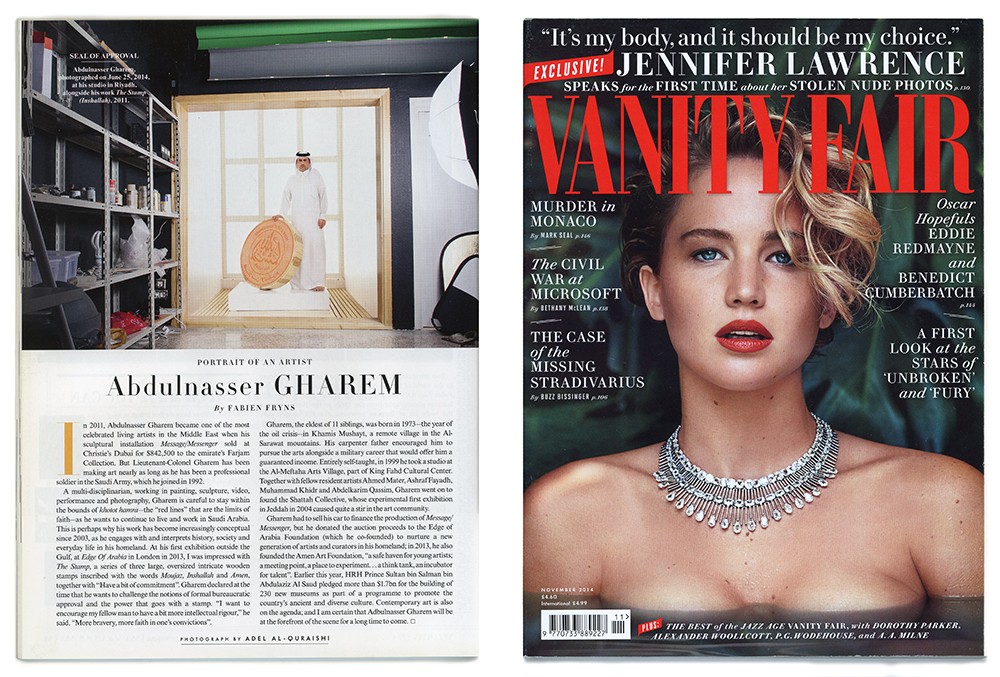